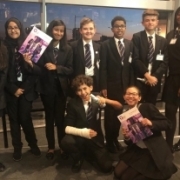 The group of students, known as Addaction, were invited by the charity First Give to perform in front of guests at their prestigious awards ceremony following an impressive presentation last year in front of judges.

This is the third year that Mulberry Academy Shoreditch have worked with First Give. Addaction won £1000 for their charity following weeks of researching, fundraising and social action work.  Last year’s finale saw 60 students and seven groups perform and raise an additional £700 for local charities. The Student Council worked collaboratively with Sixth Former leaders to produce a short film of Year 8 drama presentations featuring snapshots of students in rehearsal, interviews of their process and highlights of the students participating in various social action activities.

During the awards ceremony, the students once again explored the complexities surrounding drug and alcohol abuse through the power of spoken word, drama and dance. The students executed a stunning performance and wowed the audience, so much so that First Give staff presented the students with £100 in restaurant vouchers!  Mulberry Academy Shoreditch were duly nominated for the best school of the year award out of 170 schools, a huge achievement and testament to the students’ hard work.

Umayya, Fred, Teevana and Rosina also impressively managed to curb their nerves and perform passionate pieces they had written on issues they cared about for the Soap Box Challenge, putting them in the running to win an additional £200 for their chosen charity, plus £50 on a meal with friends. We should find out the results over the next few weeks. Good luck to them all!

The two-day trip to Cardiff was a great success. Students did a fantastic job showcasing their work and we are all incredibly proud of them at Mulberry Academy Shoreditch. 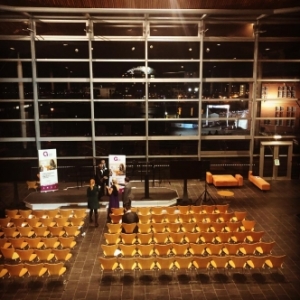