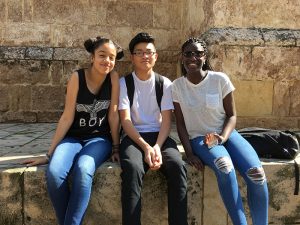 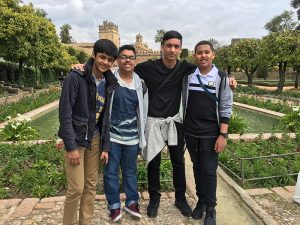 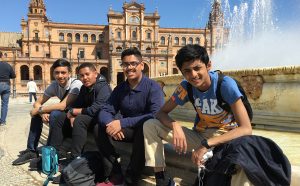 On Monday 21st March 2016 students and teachers from Mulberry Academy Shoreditch started out on what was to be an epic trip to the south of Spain, to visit the beautiful cities of Granada, Cordoba and Seville.

After the success of our trip to Pompeii in 2015, our students embarked on an amazing trip to some of Spain’s most beautiful cities in March 2016. They were lucky enough to be there during ‘Semana Santa’ (Easter Holy Week) and saw all the incredible religious celebrations.

This visit brought students’ Spanish studies to life, giving them the exciting chance to use their Spanish in a real life context.

The first city we visited was Cordoba.  As well as the unique mosque-cathedral, Cordoba’s treasures include the Alcazar,  the Calahorra Fort and the medieval quarter, once the home of the Jewish community, called “La Judería” (The Jewry), a labyrinth of winding, narrow streets, shady flower-filled courtyards and picturesque squares.

Next came Granada, where we visited the world-renowned Alhambra palace, set in the mountains overlooking Granada, where students saw the stunning Arabic architecture and gardens of the last Arab fortress in Spain before the Reconquista.

The Alhambra of Granada is the most popular monument in Spain, in 2012 it had 3 million visitors, and it became Unesco World Heritage Site in 1984.

Another highlight was on our final day when we had a guided tour of ‘La Real Maeztranza’ bullring. It is considered to be one of the finest in Spain and is one of the oldest and most important in the world. Although many of the younger generation in Spain abhor the sport, it remains phenomenally popular, especially in Seville, and the ‘Catedral del Toreo’ is the perfect place to experience the electric atmosphere of a corrida (bullfight).

All in all, the MAS trip to the south of Spain brought students’ study of Spanish language and culture to life and was huge success: students were really engaged, always asking questions and most importantly, enjoying learning.

Placing students’ learning in its historical and geographical context is vital if our students are to appreciate fully the value of studying a language and its culture. This trip was a wonderful opportunity for students to enhance their knowledge and broaden their horizons!

‘What I enjoyed the most were the Holy Week processions right outside our hotel. These were particularly special on our last day as it was the best ‘goodbye’ to Spain’ Asrima Khatun

‘I really enjoyed being immersed in a culture that I has previously been unfamiliar with. I thought the Alhambra was a particularly interesting piece of historical architecture’ Theo Gilbert

‘It was nice to see the processions with the Nazarenos and the marching band. I enjoyed seeing the Alhambra in Granada and seeing the Arabic architecture’ Ashok Oberoi